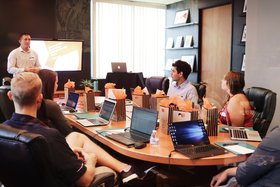 On Thursday 8 October 2021, the PadovaFIT Expanded project hosted a workshop on the activation of One Stop Shops (OSS) for the energy renovation of buildings. The event was held at the Compraverde Forum in Rome, well known in Italy and Europe in the field of green procurement applied to projects, products, and services.

The workshop took a close look at the concept of One-Stop-Shop and how these can accelerate the energy transition of the Italian building stock. Several OSS experiences already exist in Italy, which motivate and support homeowners to invest in energy efficiency and offer innovative technical and financial solutions- all were invited to the round table.The following Italian OSS were present: (1) Piedmont Region with its own OSS implemented within the European project H2020 Europe; (2) the Energy Agency of Modena; (3) the Municipality of Brescia; (4) the National Energy Agency (ENEA) and the Metropolitan City of Milan; (5) the Municipality of Parma with its OSS realized within the Potent project;  (6) the Office for Environmental Sustainability of the Union of Vesuvian Municipalities.

The aim of the workshop was to lay the foundations for the establishment of an Italian network of One-Stop-Shops, to capitalize on the work of its members and enhance the results obtained.

The workshop explored some key topics, such as the need to identify a correct taxonomy for the definition of One-Stop-Shops in Italy. The definition of OSS is ambiguous; the legal forms, the modes of operation and the business models that underlie it, differ significantly from each other. It is therefore necessary to select some basic minimum requirements that allow a correct definition of an OSS and that allow to distinguish these structures from others existing on the national territory (Energy Desks, Energy Agencies, etc.). The correct identification of existing One-Stop-Shops opens the door to three other considerations of primary importance:

I.    First consideration: the need to identify funding schemes at European level (EU funding programs), national level (Resilience Funds or resources made available with ministerial calls) or regional level (management of ERDF funds) that can support the new One-Stop-Shops, at least in the initial phase, to allow the development of the business model and the start of the provision of services on the territory.

II.    Secondly, the possibility of creating a permanent Observatory that monitors the state of health of the sector, collecting data with a bottom-up approach in a systematic form and returning an annual report that highlights the success stories and the results achieved by the existing OSS.

III.    And lastly, he need to identify a brand to identify the role and function of the OSS clearly and uniquely. The current name “One-Stop-Shop” is not able to effectively communicate its nature and is not adequately understood by professionals and citizens, among the main beneficiaries of the services offered.

The comparison between all the One-Stop-Shops invited at the roundtable has allowed, perhaps for the first time in Italy, to highlight the various forms that these structures can take. Each OSS was born in different contexts, some from European projects, others from local initiatives or from experiments of energy agencies. Each OSS involves different subjects, some exclusively public bodies, others include private subjects such as engineering companies or consulting companies. The presence of municipalities (or other local authorities) is a characterizing element of all the existing OSS and represents, now, the main red thread that connects the experiences involved in the round table. Around the role of the Municipality are born some reflections of primary importance to concretely define the potential and limits of the Italian One-Stop-Shops.

Between a public form and the market

The Italian OSS have at present, a mainly public form. This business model binds, in almost all cases, the services provided, which are mainly of an informative type. The impossibility of municipalities or other local authorities to operate on the market by offering consulting services or, in a more limited form, to give visibility to some particularly qualified professionals or companies, prevents the development of other types of services. The limits of the totally public OSS translate into a narrower dimension of their sphere of influence and a lower ability to intervene concretely in the energy refurbishment market. At the current stage, all the Italian OSS limit themselves to giving initial information or at most to orienting the energy renovation process in the initial phase, almost never entering the subsequent phases.

As a result, it was concluded that the real effectiveness of these instruments passes through the establishment of public-private partnerships. This step involves the identification of more elaborate business models, through new legal / corporate structures that require legal and administrative skills that municipalities often do not have. The PadovaFIT Expanded project and the other European projects involved in the round table can lead the way on this front, having the necessary resources to experiment with the most suitable legal forms of public-private partnership to guarantee the success of the Italian One-Stop-Shops. Starting from their experiments, guidelines will be defined to replicate the model in other Italian (and European) cities and municipalities that want to implement an OSS in their territory.

The inclusion of new services having a more advisory nature, achievable through the activation of a public-private partnerships, create further challenges for the Municipalities: for example, the ability to enter the local market without being a competitor of existing players (or in a limited form) but having instead a role of booster, of accelerator of the energy transition process, expanding the pool of potential customers for all other operators in the supply chain. This transition clearly requires structured relationships with local actors, from trade associations to professional associations. Also in this case, operational guidelines can be identified to engage stakeholders and build solutions in a cooperative way. The various experiences of OSS existing in Italy will try to share their modus operandi, to arrive at the definition of a methodology applicable in other territorial contexts.

This first meeting with the Italian One-Stop-Shops laid the foundations for the debate on the mechanisms for boosting the energy refurbishment rate. Further appointments will be scheduled in the coming months to deepen the main open questions. The intent of the working group is to constitute itself in an official form, through the signing of a memorandum of understanding, which allows other municipalities, cities, and institutions of the territory to participate and share their experience.